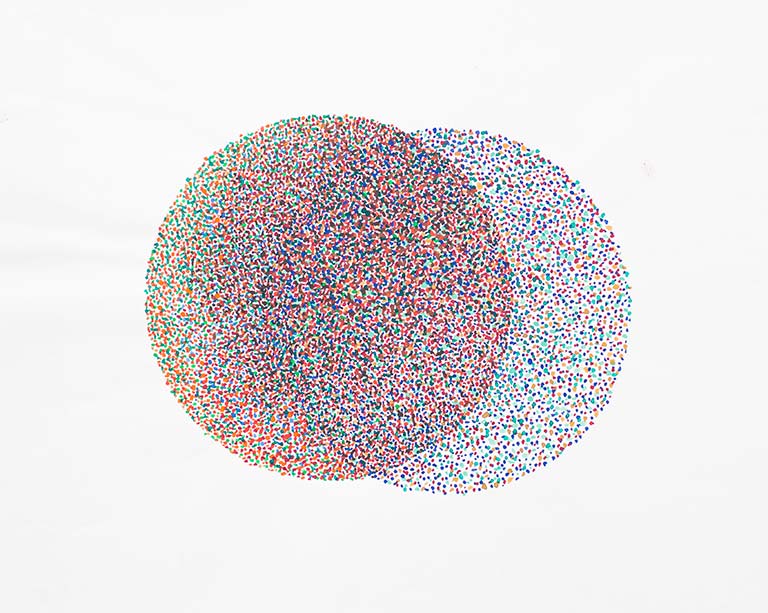 “Originally Celestial Mechanics meant the application of  classical mechanics, together with Newton’s theory of gravity, to the description of motion of major bodies – notably planets, their moons and comets – in the Solar System.”

“The deepest, core intuition of Plato’s vision of the physical world is that the physical world must, fundamentally, embody beautiful concepts.   And this beauty must be of a special kind: the beauty of mathematical regularity, of perfect symmetry.  For Plato, as for Pythagoras, that intuition was at the same time, a faith, a yearning, and a guiding principle. They sought to harmonize Mind with Matter by showing that Matter is built from the finest products of Mind.”  ( “A Beautiful Question – finding Nature’s deep design” Frank Wilczek)

…”forms not waiting to be seen, but becoming while we watch them”  (Umberto Eco “The Open Work”)

layers of phantom shapes that dissolve and then re-configure

a line that renews itself

Light in itself is a form of matter.  “Our deepest modes of thought are conditioned by our interaction with light.”  (Wilczek)

idea = imagination – to possess the universe

The inner ring around which the stars orbit is something immense and filled with light, and the black hole within  contains the mass of several million suns.

The interiors of stars. An exploding star throws out gas and dust clouds which will be the birthplace of other stars.

Everything in a state of flux – segments of space moving across the cosmic net.

Sparse clouds of gas and dust that stretch across many light years form the material between the stars, the skeletons of galaxies.

Gravity gives galaxies a tendency to cluster together forming structures…

galaxy clusters in motion orbiting around the centre of gravity.

the chain-like distribution of matter through the universe.

Dark Matter – the real stuff of our universe, a dense tissue of filaments that binds galaxies together and weaves the web to which they cluster

Quantum Physics – the science of probabilities that governs the smallest particles

Zen paintings – forms half seen.  Colour scale develops as individual series of phsychic and complex reactions, not as reactions to given forms

The dark glow of Byzantine mosaics

shafts of light hitting the water

“The work develops my long-standing fascination with painting as a model of endlessness.  An extended abstraction that moves beyond completed forms or images, to a form of energy which is contained by the canvas but suggests something bigger.

I’ve increasingly abandoned traditional ideas of form to develop what I can best call a “force-field.”  This is differently generated for each painting or drawing and appears as a skein of painted marks and broken lines.  The visual phenomenon that results seems to exist on a tenuous borderline between holding together and falling apart.  It brings into play a new consideration of the figure/ground relationship, the manner in which painted marks of colour meet the white of the canvas or page.

A delicate and highly complex fissuring of the white surface is produced.  Edges hesitate to define themselves and a new kind of relationship is produced at the interface between a coherent body or organism and the limitless space within and beyond it.”

“Pythagoreans inhabited a harmony-filled world… vibration of strings is the source of musical sounds.  These vibrations are nothing but periodic motions that repeat themselves at regular intervals.  We also see the Sun and Planets move in periodic motion in space.  So they too must emit sound.  Their sounds form the Music of the Spheres, a music that fills the cosmos.”  (A Beautiful Question”  F. Wilczek)